Worlds Within Worlds Mix It Up at The Winter Show

Art fairs are for looking, looking and more looking. They offer the concentrated absorption of the visual, cultural and historical, compressed into one location. A manageable size helps, along with a high degree of quality and kaleidoscopic diversity. The 66th Winter Show, located in the Park Avenue Armory, has size on its side — the large but not too large Wade Thompson Drill Hall — along with a goodly amount of quality from 72 exhibitors. And the fair signaled its intent to diversify by changing its name from the Winter Antiques Show last year.

The present incarnation needs to mix things up much more, especially where non-Western art is concerned. A pair of newcomers, the dealers Patrick & Ondine Mestdagh, are doing their bit with a display of art and artifacts from Australia, Indonesia, Africa, India and Japan that resembles a kind of global kunstkabinett. Dealers were also encouraged to combine older and contemporary material wherever possible. At Tambaran, for example, ritual objects including a buffalo beaded helmet mask from the Bamun people of present-day Cameroon are paired with recent confetti-like paintings involving hanji Korean rice paper by the artist Sung Hee Cho. Sticking to Japan, Erik Thomsen has done a stellar job, contrasting groups of lacquer tea caddies or baskets by pre-war bamboo masters with large screens and scrolls, often from other periods. 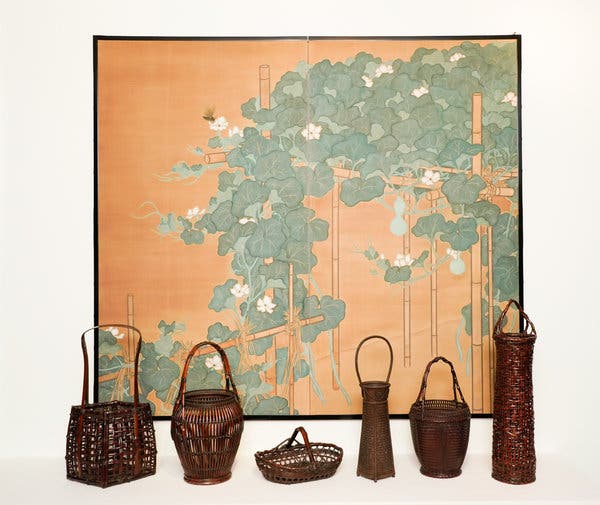 Or perhaps a dense display of 50 terrestrial and celestial globes from the 16th to the 20th centuries at Daniel Crouch Rare Books. They include a magnificent pair by the exemplar of Dutch Golden Age cartography, Willem Blaeu, whose works figure in some of Vermeer’s paintings. Even more enthralling are two manuscript globes by Emmy Ingeborg Brun (1872-1929), a Danish writer, socialist and astronomer, that incorporated the latest discoveries about Mars — briefly considered possible for socialist resettlement — into fanciful spheres that Joseph Cornell might have made.

If painted furniture is one of your failings, visit Robert Young to see an 1814 English wedding cabinet painted bright yellow with red flowers and vases. Outstanding at Thistlethwaite Americana is a small bureau, brushed, sponged and combed to resemble wood grain, only more voluptuous. David A. Schorsch–Eileen M. Smiles, whose array of folk art and folk furniture is among the show’s best, has a lift-top chest with black on dark green that exaggerates grain painting to the point of landscape. Equally strong: a pair of meticulous watercolor portraits by Dr. Samuel Addison Shute. Man and wife are seen with brushy sky-blue backgrounds that are themselves distinctly contemporary. 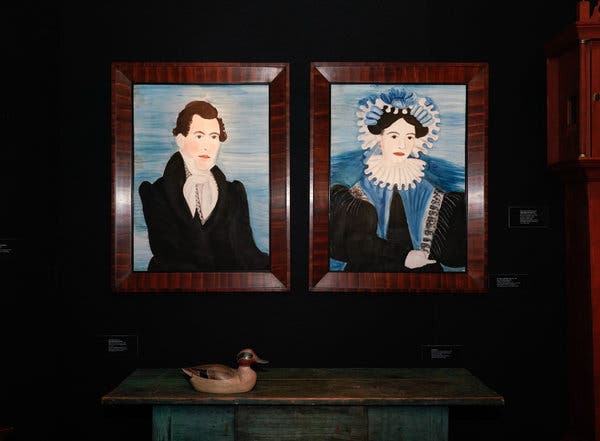 The aggressively sculptural pieces of the postwar furniture artist Paul R. Evans (1931-1987) make impressive cameos at Lobel Modern, Lost City Arts and Thistlethwaite — where they face off against the 19th-century painted furniture. When he wasn’t welding small squares of dark metal into suave, junk-sculpture credenzas and wardrobes, Evans further rethought form and function with sideboards whose jutting carapaces of wood and metal might serve as models for climbing walls. 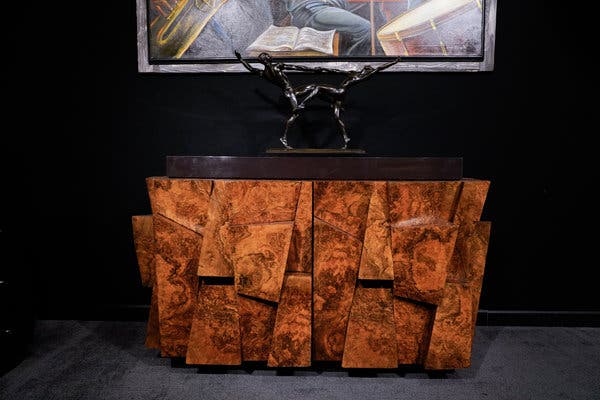 Paul R. Evans’s “Faceted Cabinet,” circa 1970, and “The Dancers” by Harriet Frishmuth, 1921, at Thistlethwaite. Credit: Thistlethwaite; Rebecca Smeyne for The New York Times

The centerpiece in Lillian Nassau’s perennial display of all things Louis Comfort Tiffany is a virtually unknown center table with aprons of pastel-colored stained glass. On it sits a Tiffany Studios weight balance table lamp made with white turtle back glass and iridescent favrile glass tiles. “Swimming Carp,” a gorgeous four-panel screen, offers a swirl of fish and water painted in translucent shades of green and metallic gold by Candace Wheeler, who formed Associated Artists with Tiffany and collaborated with him (along with Stanford White and Samuel Colman) on the Armory’s unrivaled Veterans Room. 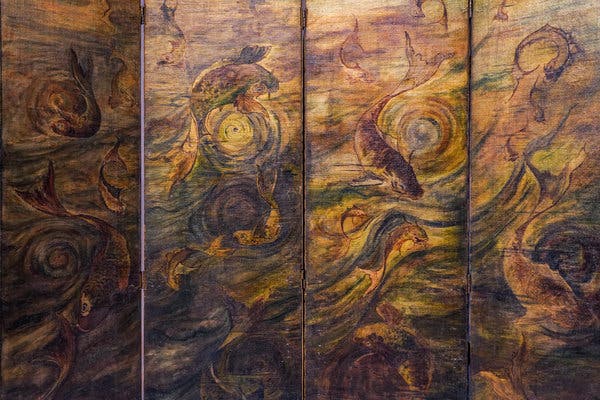 Views, Both Narrow and Wide

Lebreton opens a new area of knowledge for many New Yorkers with an extensive single-focus display of postwar vessels and sculptures by around 15 artists in Vallauris, where Picasso worked. These include handsome vases by Roger Capron (1922-2006) and two charming statues of women carrying water jugs by Jean Derval (1925-2010).

The seemingly coherent arrangement at Cove Landing is actually a diverse potpourri of English and Continental items, including 19th-century walnut side chairs attributed to the Italian architect and set designer Agostino Fantastici (1782-1845), whose delightfully spare backs might be from the 20th century (T.H. Robsjohn Gibbings comes to mind). But the star here is a French 19th-century circular table whose oyster-cut veneer top is a Big Bang explosion of radiating ovals from twigs and branches of elm and yew burl. 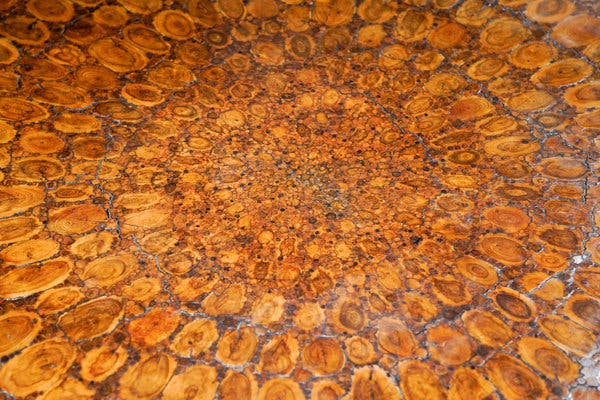 Elle Shushan has devoted most of her space to the bright, subtly comedic historical paintings of Andrew LaMar Hopkins, a 42-year-old artist, which depict the important figures and lavish interiors of 18th- and 19th-century Creole life in New Orleans, where Mr. Hopkins was born. The vividness of each painting speaks for itself, but there are also texts by the artist identifying the subjects and detailing their rooms’ furnishings. 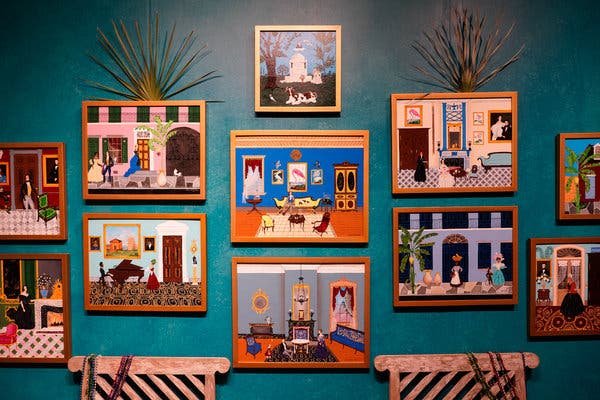 Daniel Blau, a newcomer from Munich, has mounted a group of drawings by Andy Warhol, the freshest of which date to a trip the artist made to Angkor Wat in 1956. In blue ink, temples and sculpture are defined in simple silhouettes and unbroken lines — as if the artist were loathe to lift his pen off the paper. 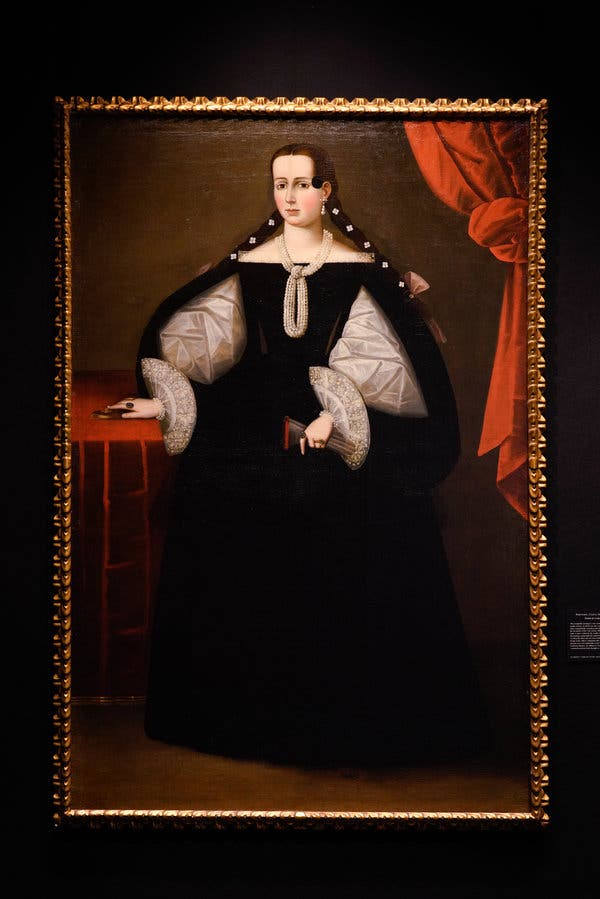 When you reach the “just one more” level of saturation, booths that feature a single work of irrefutable power let you decompress toward departure. Dominant at the excellent Robert Simon Fine Art is a rare example of female portraiture from the Peruvian Cuzco School, around 1690-1710. The high status of a grande (if unknown) dame is confirmed by her opulent array of black velvet, lace and pearls. Michael Goedhuis has a 12th- to 14th-century Chinese carved stone capital of a coiled dragon resting on a wood column that seems certain to have its own pedigree. At Ronald Phillips Ltd. you may only have eyes for the spectacular Japanned bureau cabinet from 1745, by the great British cabinetmaker Giles Grendey (1693-1780), that may have been part of a large group made for a German client — judging by the Prussian-looking eagle on top.